We all know him as David Byron – the showman, the rock star and the charismatic front-man of the legendary Uriah Heep throughout the period that saw them at the very height of their powers – the early seventies. But where did this larger than life personality come from? How did he get to mesmerize huge arenas, achieve fame, recognition and achieve massive album sales whilst leaving those lucky enough to see him in all his ‘peacockish’ glory with indelible, lifelong memories?  What sort of background produced someone with enough flare to light a whole city?  Just who was David Byron?

To hopefully answer some of these questions we need to go back to the beginning of the Second World War – to Essex in England. David’s father was David James Garrick and in the late 1930s he married Rosetta Caroline Florence Purkis.  Like all newlyweds they just wanted to settle into a new home and look forward to starting a family. Europe however was once again on the very brink of disaster with the threat of all-out war becoming ever darker on a daily basis. No-one knew what the next few weeks, let alone years, would hold.  It was a time clouded with uncertainty and fear.

Through Mr. Garrick’s work as a compositor, type-setting for a London based printing firm called Odhams Press, they had managed to buy a house and set up home together.  It was in Palace View Road, Chingford, Essex, and was [and still is, pictured left] an attractive house in a tree lined suburb to the east of London.  It provided perfect access for his work, but also good schools within walking distance as well as the wide open spaces of nearby Epping Forest.  However once the war started and the blitz took hold even this unassuming place suffered the effects.  Several nearby houses were hit by bombs, lives were tragically lost and people’s property and lives destroyed.  Fortunately for the Garrick’s their house escaped.

In 1945 the war finally came to an end.  The announcement sparked scenes of joyous celebration with street parties organized by local residents. It must have been hard to celebrate if your family had lost someone but the sense of relief at the prospect of peace was something obviously worth commemorating.  The local residents of Chingford were no exception and celebrated with a huge street party.  It was at last the right time for the Garrick’s, and many other young families, to start their families sparking what became known as the ‘Baby Boom’ years.

On January 29th 1947 Rosetta was taken into St. Margaret’s Hospital [pictured right], on the edge of Epping Forest and gave birth to a son who they named after his father.  In 1952 young David John Garrick started his education at the nearby Normanhurst Infant School and latterly the primary school in the same building.  His musical education had apparently already started – as he later explained in an interview with the Dutch rock magazine Musiek Express in October 1973 – "I started singing at the age of five. My mother was singing in a jazz band. My whole family was into music.  Everybody played an instrument."

David was a bright student and successfully passed his eleven plus exam which meant he could go forward into the Grammar School system that existed at the time.  His parents had even more ambition for him and in September 1958 when he was eleven years of age they managed to secure a place for him at the highly prestigious Forest School.  Forest was an exclusive, expensive private school in Snaresbrook not far from Chingford where the family still lived.  Housed in a beautiful building its facilities, history and reputation made it a much sort after school for gifted students fortunate enough to have parents who could afford the fees.  The school’s imposing Memorial Dining Room, which David would have known well, remains a listed and preserved building deemed of special architectural and historic interest.

David remained at Forest School until July 1964 when he left aged seventeen.  During his time there he showed a keen interest in sport and played regularly for the school football (soccer) team. His school report card (which was kindly shown to me by the school records department and includes a wonderful photograph of the young schoolboy David) made for interesting reading.  Under the heading ‘General Assessment of Character, Personality and Conduct’, David is described by his form master as "resentful of authority at times", but also as "cheerful "and with conduct that was "generally quite good."  It goes onto to state that he had "good reliability and trustworthiness."  The heading ‘Particulars of Intellectual Qualities and General Education Record’ results in the comment "not particularly bright" however, it does go onto reveal that he was also "quite sharp" but possessing "little perseverance."

In December 1963 he successfully passed both English Language and English Literature at (what was then) ‘O’ (ordinary level) standard.  Nothing remarkable there but rather tellingly underneath his educational achievements is the note which states that he "organized and sang in a guitar group."   So the seeds had already been sown and the music that had been part of his family background had started to emerge.  His rebellious stance against authority had also begun to take shape and he was beginning to stand out from the crowd.  The school had no doubt groomed him to provide his articulate style of speech that would later make his subsequent interviews with the rock press of the world particularly fascinating.

Young David Garrick had, perhaps unknowingly, taken the first tentative steps towards the ultimate stardom he would later achieve.  There was, of course, a very long road left to travel.  It would take a level of determination, commitment and belief along with a burning desire to succeed – all of which were qualities that the school either hadn’t recognized or had simply remained undiscovered.  It would take a special type of personality to enable him to evolve into the performer he would later become.  The sheer hard work, the knockbacks, the criticism and disappointments would all have to be overcome (and learnt from) to allow for the development of the huge talent that would eventually emerge.  David John Garrick was on his way to becoming a rock star.  Forest School clearly followed his progress and a later notation on his school card about their famous former pupil adds rather simply that he became "a member of the Uriah Heep pop group." 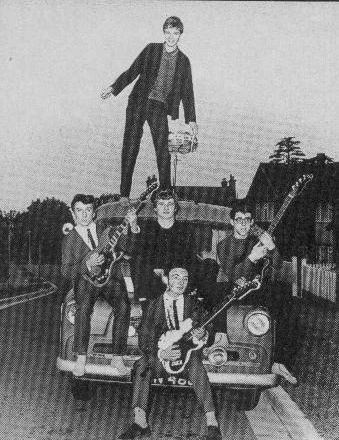 Not far from Palace View Road lived one Mick Box (born June 9th 1947).  By 1965 the keen young guitarist who lists the likes of Django Reinhardt and Les Paul among his early heroes was ready to form a band.  The first concert he saw was Johnny Kidd and the Pirates which boasted Mick Green on guitar and the young Mick Box keenly watched his every move.  His first stage performance of his own was at school but once he had left he set about forming a band which would later become The Stalkers who played local pubs and youth clubs. Despite good honest endeavor and Mick’s own burgeoning guitar skills the band made very little progress.  That is until they needed a new vocalist.  The drummer at the time was Roger Pendleton – whose cousin was David Garrick – and the rest, as they say, is history.

So when did David become a vocalist?  David himself filled in some of the gaps, first were a few comments he made for a Mercury Records promo release in 1970, "When my parents were young there weren't a lot of groups around, so everybody sang.   That was the way I started.   Every time I went to a party I'd sing or act or do something just because it was all I really wanted to do, and that was what gave me my first break."   Further insight can be taken the comments from the interview with Musiek Express in 1973 when he said, "my first band had no name, didn’t do any gigs and lasted exactly two weeks! When I was sixteen a local band offered me a job. I did one gig with them and then joined the band of Mick Box which was called The Stalkers.  They had fired their vocalist and at the audition I had to sing Johnny B. Goode and I was hired straight away."

It was now 1965 – the year The Beatles released ‘Help!’ and the Rolling Stones unleashed ‘Out Of Our Heads’ and The Stalkers with David Garrick on vocals busied themselves playing local venues. It was the start of something magical, something extraordinary.  It was the beginning of the road that within a few hectic years would lead to worldwide recognition.

Back To Biography I Back To Home