Toronto based singer Phil Naro has been on a roll over the past few years, with each release being better IMO. "Glass Mountain" is the 1st release as a Phil Naro solo album that includes all new material. Produced by longtime cohort Steve Major and features a number of guests - Mike Staertow, Don Mancuso, Andy Curran, Stan Miczek, Glen Allen, Chaz Butcher, Major himself on all tracks and numerous others.Glass Mountain is essential HR/AOR listening. It rocks for the most part, with a good edge to it, which doesn't sugarcoat anything.  Aside from a few decent ballads, this CD is full on guitar rock, with easily likeable classy rockers like "Hot For You", "Heartbreak In The Night" and "Bad Boys In The Hard Luck City", along with lighter gems like "Donna" and the acoustic "Under The Night Sun". Many tracks sounding like they're right out some 'best of the '80s AOR radio rockers', like "Find My Way Back To You" - which is another track decent track, catchy hook, harmonies, a memorable chorus... Naro's vocals are excellent throughout and the playing is solid, with a number of cool riffs, hooks, catchy chorus', as well as harmonies, limited keyboards [including some hammond backing on a few tracks]. "Glass Mountain" is highly recommended for aor/HR fans. It sits comfortably with the best of the likes of Loverboy, Foreigner and Coney Hatch. For more info check out: www.philnaro.com

The 2nd 24K release features 11 tracks penned by Phil Naro and guitarist Mladen. It's fair to say if you liked the debut 24K disc you'll like this as well. Another thing I'd say is that Naro's latter day releases have been consistently good, the guy doesn't include garbage on his albums and any fan or Hard rock/AOR will dig them. "Bulletproof" is solid, although perhaps a step below the debut disc IMO. But tracks like "Black & Blue", "Get It While You Can", "Pennsylvania", "Put The Blame On Me" and the Thin Lizzy sounding "Last Time I Fall In Love" [great guitar sound from Mladen] are all great tunes. Overall Bulletproof is a bit harder-edge than it's predecessor [and Phil's solo disc] with no ballads here. Highly recommended! Check out: www.philnaro.com

American rocker Eddie St James latest release with 'The Little Gods'. St James was a hard rocker on the LA scene in the '80s, but now resides in Germany and his music has been more in the vein of Beatles' and '60s rock. "Under Blue Skies" is a 4 track disc with St James as featured singer/songwriter/guitarist. Though not as Beatle sounding as his previous 4-track disc ["Something More"], "Under Blue Skies" is still influenced by '60s pop/rock, though not dated by any means, and a bit more upbeat than it's predecessor with memorable tracks like "Love Junkie" and "Suddenly You" - both nicely produced with horns, piano and all. "That Girl" slows things down; it's a soul/blues styled light track, with some nice underlying hammond organ. Last up is the more pop/funk track "Sleeping with the Past", reminds me [slightly] musically of Glenn Hughes funk style [tho not vocally]. An interesting concept St James has come up with, just releasing 4 songs as opposed to a full disc, with all 4 tracks [again] being enjoyable, and all potential to be hits if given the chance. Great vocals and performances all 'round, credit to 'The Little Gods' - Peter Schnur [keys], Chris Egginger [bass] and Gert Kirchgessner [drums]. Worth checking out! For more info see: www.eddiestjames.com

PROMYSE - Audience Of One [Independent] 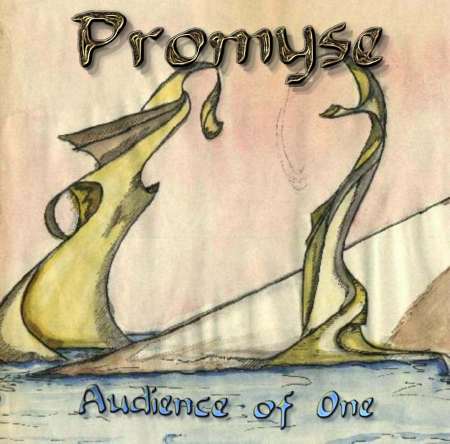 A band basically put together via the internet and Uriah Heep fan connections, Promyse is actually a good bunch of musicians from the US, notably Dave White [who doubles as Heep's webmaster] and has a few of his own solo recordings out there, as well as various players and singers here. Promyse is easily appealing to fans of classic Heep, early Styx and various '70s bands that could produce classy acoustic stuff or hammond & guitar rockers and epics. 70s classic rock fans will quickly draw a liking to tracks like "Answers", a mid tempoed track with a feel and lyric that makes me think this belongs somewhere on Styx's "Grand Illusion" LP, even with singer Bob Dreher sounding vaguely like Tommy Shaw at times. "Clouds" and [followed by] "Boxes" are strong tunes; the former has a quiet piano intro before the vocal comes in and the song builds up with guitar and hammond [somewhat of a power-ballad], while the latter is an upbeat track, the closest thing to something commercial here [IMO] and probably a good choice for a single. "Audience of One" is the album's centerpiece ballad, and it's a gem, a good vocal from Graham Hulme! Other tracks include the title track, "Mule" - a heavy rocker, much in the vein of Heep's "Free N Easy", although I think the vocal is a bit mismatched for the song and mix. "Warriors" is a solid track, followed up nicely by perhaps the classiest piece here - "Goin Home", a minor epic, great vocal, hammond, guitar fills [plus a cool solo], tempo changes... a song that sits comfortably amongst the better of Heep and Purple. The disc ends with a few rocking instrumentals [great groove and performance on the first one], also included is a "Audience of One - Reprise". What's impressive about Promyse is that a lot of thought has gone in to the songs lyrically and musically; there's plenty of great intros [piano, synths...], and the mix and interplay of piano, guitar and hammond organ is cool, as well as the 'heep-ish' harmonies in places. This all makes for a CD that is beyond just a few listens, and something that will see many plays in my machine. The vocals for the most part are decent and suit the tunes given, though there's no David Byrons or Ian Gillans among the pack. The lyrics on all but one track were written by Ron Mann, there's 4 singers used here [Brad Todd and Bob Dreher handle the majority of the songs], and various musicians [most prominently is previously mentioned Dave White, Dreher on guitar, and keyboardist Jim Budner]. Overall Promyse may not be on the same musical level as the likes of Heep, Styx, Kansas... but it tries real hard and that is what will draw listeners in. For more info check out: www.promyse.com & www.davewhitemusic.com

A somewhat odd release from the duo of Sheehan and drummer Terry Bozzio, putting together fusion prog/rock stuff with almost spoken word lyrics from Bozzio. Both musicians play numerous instruments with Bozzio playing numerous keyboards, guitar-synths, gongs and bells, while Sheehan doubles on baritone guitars. A rather strange disc that'll appeal to those with unique tastes. For more info check out: www.terrybozzio.com & www.billysheehan.com

A decent compilation/sampler from Outlaw Entertainment featuring 13 guitar rock tracks from artists such as sleaze/hard rockers  American Dog, the more blues influenced playing of Billy Butcher, the heavy sound of former Annihlator frontman Randy Rampage, Eric Moore & The Godz [late 70s US band who enjoyed a strong cult following], and the metal of Subsonic [lead by Celtic frost guitarist Ron Marks]. If you're interested in guitar hard rock and solid metal  tunes this might be worth checking out. Check out: www.outlawentertainment.com