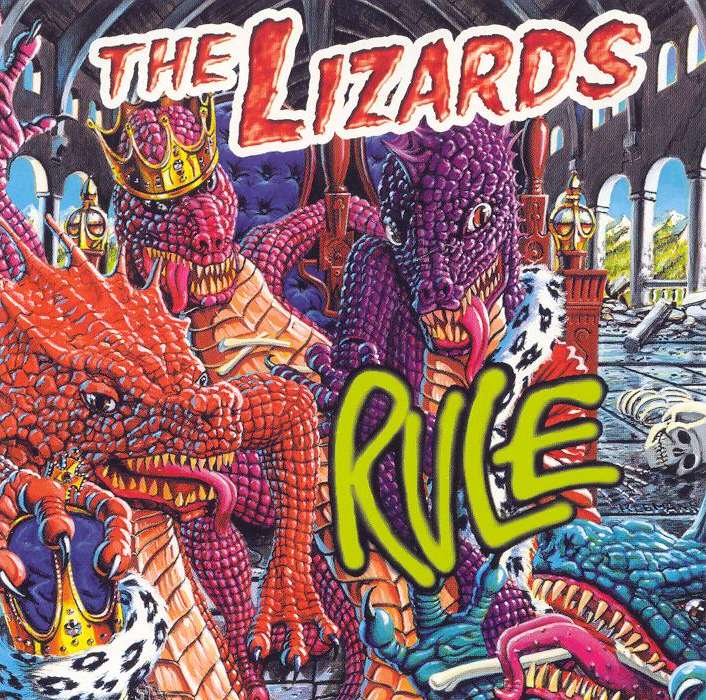 The Lizards, follow up their 2nd album ["Rule"] with a Live CD and a Live DVD - neither, of which are the same show. The CD "They Live!" is taken from a performance in a club in Windsor, Ontario while the Live At BB King is from another September 2003 show in New York City.

The Lizards, live, are a tight and heavy band, backed by the powerful drums of Bobby Rondinelli [ex Sabbath, Rainbow...] on these releases and fronted by ex Sir Lord Baltimore singer John Garner, who's voice is every bit as powerful live as on the studio releases. Founders Patrick Klein [guitar] and Randy Pratt [bass] both stand out for their appearance, with the tall Pratt dressed in a psychedelic theme and remaining steady on stage and doubling on harmonica; Pratt on the other hand [in a polka dot shirt] gets around most on stage, stepping out for his solos, while Garner [w/ his classy black cowboy hat] keeps busy either with the bongos or tambourine.  The band's live set list is pretty much split down the middle, with the majority of the songs that are the first half are taken from their debut disc and the last 4 are from the band's 2nd CD "Rule".

The live CD is excellent in performance & sound; these guys deliver the tunes to a tee, without straying from the studio recordings, though I'm sure Rondinelli adds a bit of punch to the earlier songs and Klein's guitar solos jump out more [check out "Sing For Me"]. Klein's riffs & Pratt's bass-lines seem to feed off each other, as they go back and forth heavily on "Hungry World".

The DVD is filmed before a packed & enthused audience, and offers a slightly different track listing and a Rondinelli drum solo. The concert is nicely pieced around interview clips with band-members, discussing the band and the songs. The filming isn't all over the place, as with many live DVD releases, so you can enjoy the performance closer to as it was as opposed to getting a headache trying to follow it. In comparing the studio disc and the live releases, it's clear these guys are a band that needs to been heard live to fully appreciate. They come off a bit heavier and though they start out strong ["Something Higher"] the performance seems to pick up from song to song, ending with the band's heaviest gem "Hard Luck Messiah"; a song that Garner admits has to be the finale because it's impossible to follow up.  Well worth checking out, especially if you have neither of the band's studio releases or if you aren't likely to catch these guys in your area.


Recently former Riot singer Mike Dimeo has taken over as the band's frontman. For more on The Lizards and CD & DVD ordering check out their website > www.thelizardswebsite.com