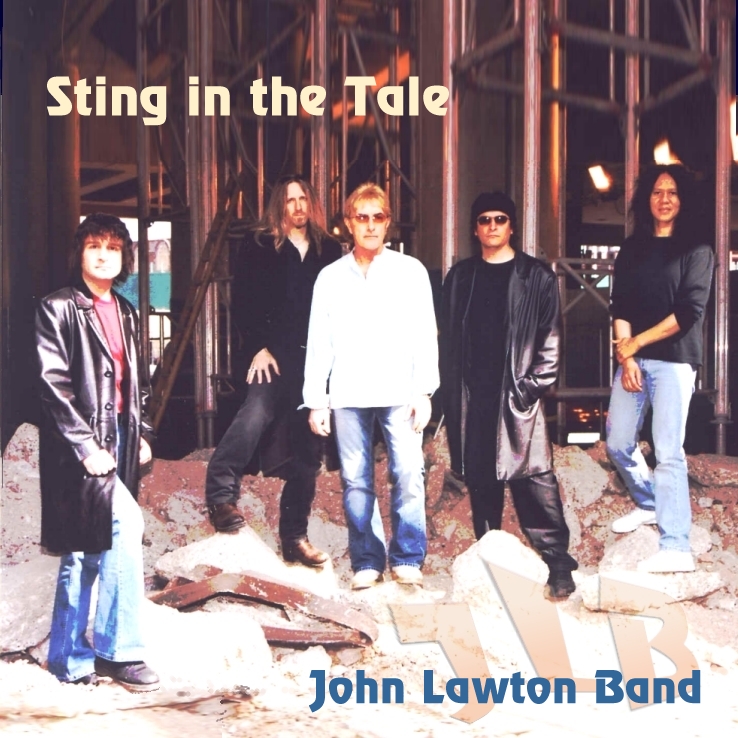 Sting In The Tale is the newest CD featuring former URIAH HEEP & LUCIFERS FRIEND singer John Lawton. The difference being it is now the JOHN LAWTON BAND ... And a great band it seems, with all the bandmembers contributing to this new CD.  For the past 10 years John's recording output has been growing consistently and better with each release. From the pop-rock Lucifers Friend comeback CD "Sumo Grip" in '94, to a great mish-mash batch of covers and a few originals on Gunhill's "Nightheat", to his bluesy solo disc "Still Payin My Dues To The Blues", the one-off live reunion disc with Ken Hensley [of mainly Heep tunes], and the acoustic pair with Steve Dunning - "Steppin It Up" and "One More Night [Live]" - Lawton's been busy and this latest CD is his strongest original project in the past 20 years!

Sting In The Tale rocks harder than anything John's done in years, though not quite as 'metal' as the Zar project from 13 years ago, but certainly with a heavier drum sound, some cool heavy guitar work and a strong bunch of memorable tunes. Early favorites are "Written On The Wall" & "Angels They Cry" [w/ nice Heep-like harmonies] - 2 of the heaviest songs here and both penned by JLB's Canadian guitarist Erol Sora.  Bassist Steve Dunning contributes 4 good tracks here - "Take You High" [the lead off rock tune here], as well as the bluesier "King Con", the slightly funkier "Firing Line" [which reminds me of latter day Glenn Hughes] and the straight ahead rock of "Slamming It Down" [a great drinking anthem!].  And the man himself contributes 5 solid tunes here with such rockers as "Give It Up" [co-written w/ keyboardist Leon Lawson] and "Reach Out" [featuring Cleveland's own Dave White on guitar], as well as slightly lighter rock gems "Lately", "Tracks Of Time" [a very catchy upbeat song, and best choice for a single here IMO], and the ballad ''I'll Be Here". Lastly [and  fitting perfectly] is the classic blues rock tune "Dog House" [penned by drummer Benjy Reid w/ Robert Taylor], complete with harmonica [courtesy of Tony Cavaye] and perhaps the best Lawton performance here.

The songs are great on Sting In The Tale, but so are the performances. The guitars are blended nicely [some acoustics mixed with much heavier riffs and solos] and are big sounding, with a powerful drum & bass sound, a bit of hammond organ backing various tracks [although could be heavier in the mix in places], and top it all off with John Lawton's strong blues-rock voice [the guy sounds like he is enjoying rocking out here] - and yee have one full sounding, complete and superb classic hard rock disc of 12 brand new gems. And might I add, this gets better with multiple listens!
*To order go to www.johnlawtonband.com  [discs here come signed by the band!]
Also check out www.johnlawton.org ,   www.classicrockproductions.com , &  www.moreheep.com
Review: © Kevin J. Julie (Universal Wheels) '03